How to tell if someone you love has a problem... 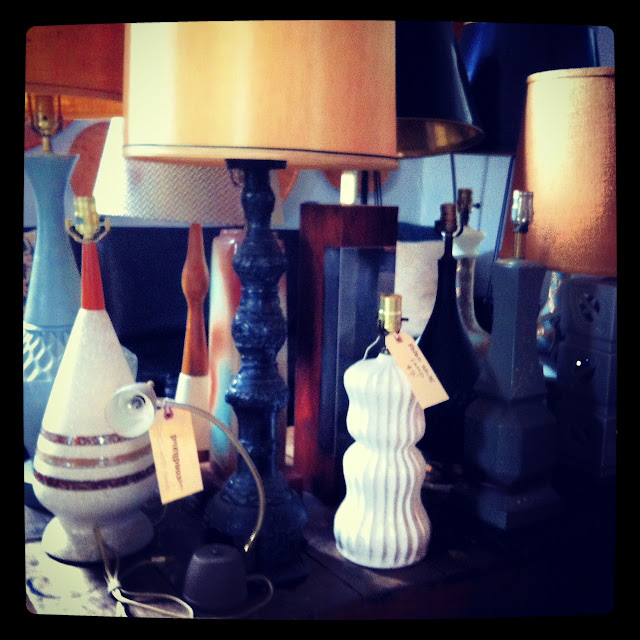 I am getting ready for the Green Shag flea market this weekend, and here is  the pile of lamps that I'm not currently using and plan to sell this weekend. It's hard to tell from the picture but there are 16 lamps, It kind of breaks my heart to think of these lamps no longer living with me, but I think its for the best.
If you or someone you know also has a vintage lamp hoarding problem, please send them to see me this Saturday at the Green Shag sale, because if I have to try to put a stop to this problem of mine, I might as well enable someone else.
Posted by hannah at 1:37 PM 7 comments: 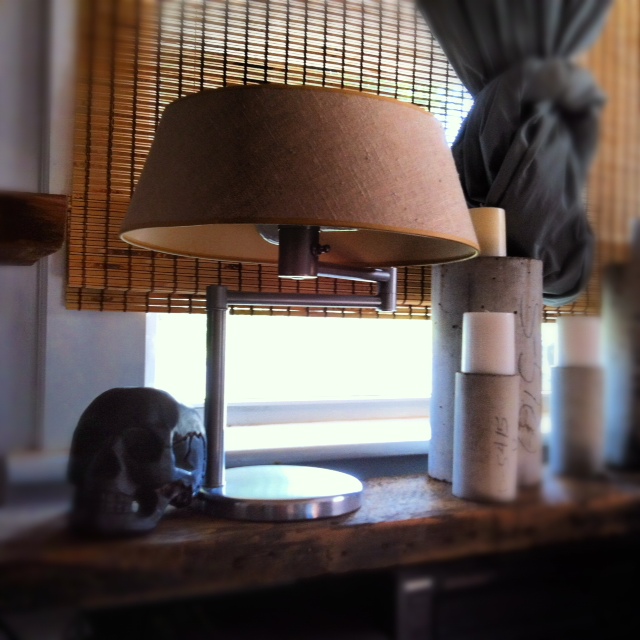 I keep bringing home more lighting. I can't stop myself. I may have a problem. I may not have enough outlets.
I found this Nessen swing arm lamp yesterday at the thrift store. $5 and a very long frustrating wait in line is all it took to make it mine. It still has the Nessen sticker attached to the bottom. The linen lamp shade and cord are what gave away its age, but the body of the lamp looks like it could have been made yesterday. I believe that's the point to modern design. The lamp still has the diffuser at the top of the shade, which helps cast a beautiful glow.
Doing a little research shows that this exact lamp resides at MOMA and was first produced in 1927.
Posted by hannah at 9:04 AM 4 comments:

I was out of town all last week, so I didn't have any time to work on projects, but right before we left town I decided to do a little rearranging of the kitchen.  I decided I would move our stainless steel table out of the kitchen and in its place put our old pedestal table back in, and group my new Bertoia with the pair of Eames wire chairs I had bought a couple of years ago at an estate sale. I love the Eames chairs, especially only having paid $3 a piece, even though at the current time they don't match.
When I found the Eames pair they had been used as patio chairs, and one had breaks in the welds so bad it was no longer attached to the base. I took that chair to have it welded, and when I picked it up the man doing the work took it upon himself to also paint it. I'm sure he did this to cover up what mess the welding had made, but I wasn't sure I was going to paint them. Now, I like the contrast between the two but maybe someday I will paint the other one.
I do think the new Bertoia chair is enjoying the company he is keeping, and I hope he is finally feeling loved.
Posted by hannah at 8:38 AM 5 comments:


Free style picking is a term I borrowed from the "American Pickers" , and they use this term for when they drive around and when they see something they could be interested in buying they ask the owner if they would sell it to them.
We were on a walk and I noticed in a backyard there was a lonely Bertoia accompanied by a folding lawn chair and two beat up wooden kitchen chairs. The Bertoia looked lonely and scared, not knowing how its life took such a turn that it would end up in a place this.
I asked the man out front if it was his chair in the backyard, and he said no its my neighbors, and he's not home. So, as I walked home I decided It was my job to rescue this poor lost soul, clean him up, and let him know he was loved.
I decided to drive by again a couple of days later, and I was lucky enough that the owner was in the back yard. I asked If I could purchase the chair, and ready for my rejection, he kindly said yes. He first told me he would feel bad charging me, since he had found the chair himself. But, after thinking it over for a moment, his reply was $15. I couldn't get to my wallet fast enough and handed him the money. He smiled and said he thought I was going to try to talk him down, and that he would have taken $10. he loaded the chair into the car, and we were both as happy as could be.
The chair needed some love, and as I had promised, I took him home, and began to bring him a new lease on life. I scraped him down to get any loose finish off, I took the seat off the base, and used white appliance epoxy on the seat and the used black plasti dip on the base. I did a few coats of each, letting them dry in between. And that is how this Bertoia got a new home. ( I also had to promise no more nights spent out side, this city can be rough)
Posted by hannah at 9:29 AM 14 comments: