These rugs are one of my most recent and treasured finds. A couple of years ago when ABC carpet started selling these overdyed rugs, I tried DIYing one, because I knew that I would never be able to afford one. The DIY was not really a success, so I moved on to other things to obsess over.
Fast forward to last week, when I decided to stop into a resale shop close to my house, that I had always overlooked. I decided to stop in even though I had two kids in tow, and I was sure that "Grandma's Attic:" was going to be a bust. When we got into the store it was stacked to the ceiling with things that you would find in my grandma's attic if she had one. It was mostly junk even though my 5 year old was very excited by her collection of beanie babies and plastic Mardi Gras beads. I decided to give the room with clothing a once over when I spotted what look to be a cool rug. I went over for closer inspection, and found 3 patchwork antique/vintage overdyed rugs. I of course had a baby in my hands and was unable to sit him down, because that's exactly where they coined the term," bull in a china shop"(I think). So, since grandmas prices seems closer to the reasonable side I asked what it would cost to take all 3 home, before I even took them down off the rack knowing it was going to be a task.She told me I could get all three, for about next to nothing. I quickly with the one free hand I had started pulling the rugs down and loading them in to the trunk of my car.
I of course would like to keep them all, but since I don't want to end up on an episode of  "Hoarders", I have listed the multi-colored one in my new Etsy shop, that you can find the link to right under my header. I just opened up shop a couple of weeks ago, and have tons of things to list, but seems to be going a little slow. That is partly why my blog has been put on the back burner. Hopefully soon I will find time to manage both.
The bottom two photos are of the purple/cobalt rugs in place, these are the two I willing be keeping for a while. I am trying to take rug layering to the extreme, and so I have a Moroccan reed and leather rug under a cowhide and then topped of with my new Patchwork overdyed rugs from Pakistan. Its a little much, but I always hear in decorating to make sure and layer! 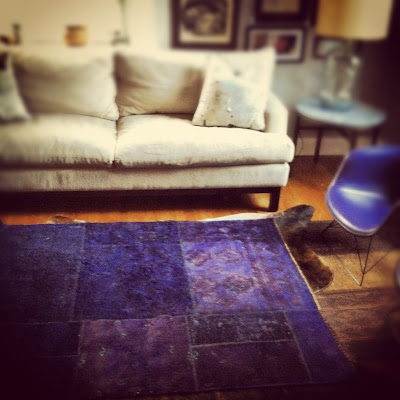 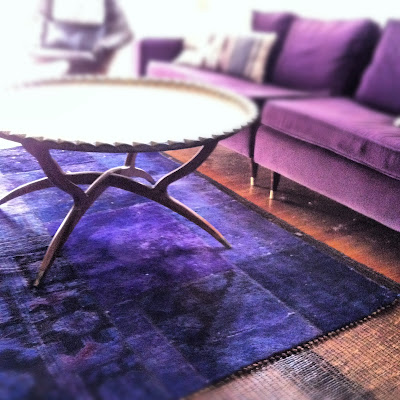