One of the missing pieces... 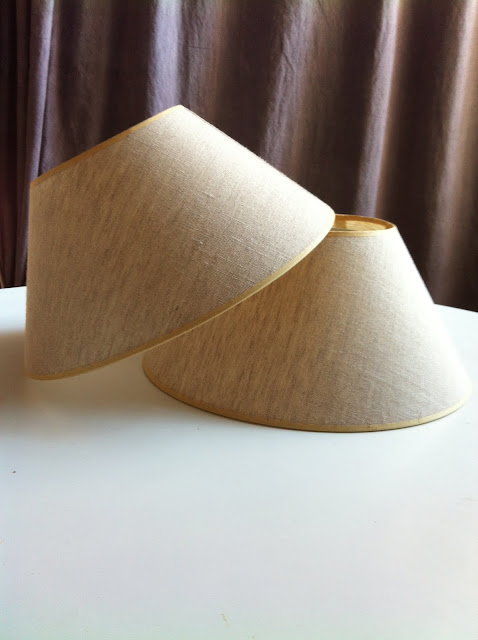 This pair of vintage lamp shades were thrifted a couple of months ago, and I recognized them as what I believe to be Walter Von Nessen shades. They were made to sit on top of a glass diffuser instead of sitting on top of a harp and using a finial. I searched all over the thrift storing thinking I would find the missing lamps, and with no luck I decided to still bring them home. It gives me a reason to thrift in a way. When you have something to look for, its a great excuse to scour the thrifts, instead of admitting that I'm going out to blow money on things I don't really need.
So the search was on. 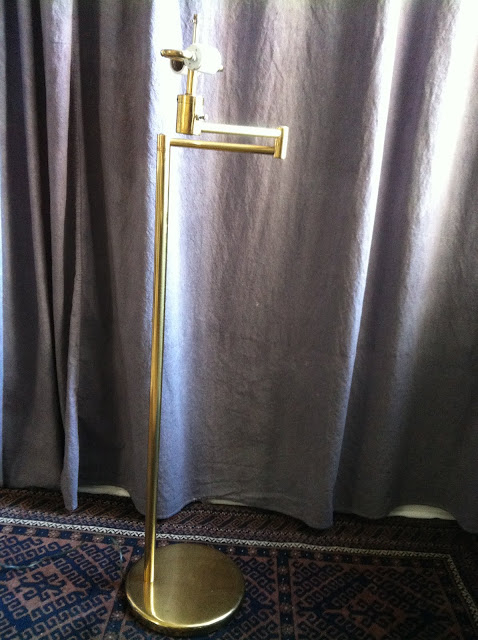 I found this guy out at a thrift store that I usually don't frequent. It is a Nessen lamp, but is really no help to me. It requires a different style of shade that unfortunately I don't have just laying around. The brass is a little too shiny for my taste, but I thought I could possibly sell this one and switch it out for a style I could use, since then it's been sitting in my basement.
The search continues.
I then stopped at the thrift store closest to me, that I probably spend the most time at and found exactly the Nessen lamp I had been looking for.(kind of) 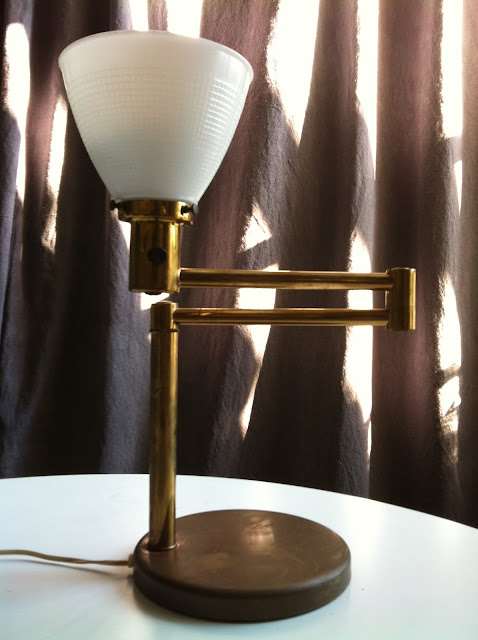 Here is a Walter Von Nessen swing arm lamp with a glass diffuser missing a beautiful linen shade. It is brass, but has a great patina, not the shiny brass of the floor lamp.
﻿
﻿
Now I don't want to sound like a complainer, I think this lamp is gorgeous just the way it is. I am happy to return these two lost souls together and I am a step closer to my goal. But this lamp is now somewhat lonely without being part of a matched pair. The first Nessen lamp I found is brushed nickle (?) and has more of a drum shade, not quite so tapered.
And to be honest I like the brushed nickle lamp a little bit more that the brass lamps. But I believe that at some point I will run into another swing arm lamp with a glass diffuser in need of a shade, especially since this style of lamp only has the shade sitting on top and not attached. I'm sure it's quite common for these to get separated.
And that my friends is only one reason I drag myself to the thrift store day after day, in hopes of finding the other missing piece.
Posted by hannah at 9:50 AM 1 comment:

It's still kind of hard to talk about... 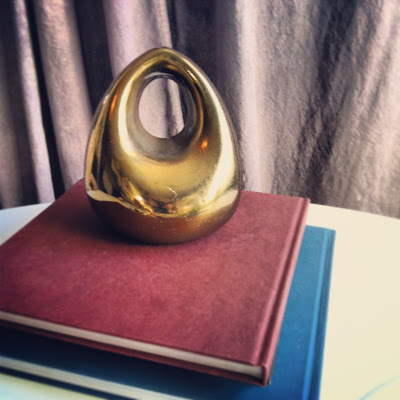 I found this pretty Ben Seibel "Orb" bookend at the thrifts this week, and sadly it was all by itself. We searched high and low, and even asked an employee, who said there was a pair when they were put out. They were priced individually and at $1.29 a piece, it still kind of hurts my heart. When I told my husband how sad I was to miss out on the other one, he said imagine how sad the other guy would be to find out his new " catfish sinker" is an expensive bookend. We both had a good laugh, and then I got really sad again imagining a big hairy guy in cammo stand in the isle at the Salvation Army, yelling to his wife,"we're going juggin' tonight sweetie, found the weight we've been need'n"
Posted by hannah at 9:35 AM 3 comments:

Where did the last month go?

I purchased this pair of canvas saucer chairs at an online auction that Rothchilds was having. I had heard that everything from the store was being sold online auction style, and decided to take some time to check out what they had to offer. There were lots of beautiful pieces with the starting price next to nothing. So while I enjoyed a few cold beers, I decided to bid on a few items. With the prices so low I got a little carried away and before I knew it, I had bid on a handful of items I didn't really need.
The next morning I decided that I wouldn't get carried away with the bidding, and whatever I won would be done on one bid.
The end result was  this great pair of chairs that I once admired out in front of Rothchilds. They are like a butterfly chair frame where the canvas is suspended, and the frame joints are welded. They seem to not be as common as the butterfly chairs and the only other one I could find online attributed it to Hardoy.
The slings aren't in great shape and required some repair before they could be used, I decided before I spent the time making new slings I would just use some drop cloth canvas to patch the damage. It worked well, I just used patches underneath and used the zigzag stitch on my sewing machine.
When I went to pick up the chairs on the designated day, the first thing I saw when I walked through the doors at Rothchilds was a huge gorgeous coffee table, that of course had been purchased by someone else, by auction. It literally stopped me in my tracks, and even though it wasn't for sale I had to stop and run my hands over it. Gorgeous. I hadn't noticed it online, and I'm sure by the photo you weren't able to tell the size of this beauty.
I grabbed my chairs and headed home. Three days later, my table shows up on craigslist. I recognized it due to the seller using the photo from the auction. My heart skipped a beat. No way. When I saw the table at Rothchilds I was sure that it sold outside of my price range and that's most likely why I didn't notice it at the auction. The table on craigslist was listed far below what I would have considered a fair price, so I made the call and hoped for the best.

This is the table in our entryway, and its hard to tell from the photo the size. I believe its 52'' in diameter. Its a big table. After I did a little research, It believe its made by the Tomlinson company and composed of butternut and pecan wood. It is top with fitted glass and has dovetail accents.
This photo shows the table in one of our living areas, and the nice thing about it being so large, is that I can put my hot coffee in the center of it, and he can't reach it. Which is huge for me right now, because our littlest is in to EVERYTHING.

Sorry this photo is so grainy, the new table is also shown with the boys' rockers'. The baby received a wide-mount rocker base from Santa( Santa has great taste in modern design) so now both kids have side shell rockers.
There are plenty more new additions to the home since the last time I posted, so stay tuned.
What did everyone else get for Christmas? 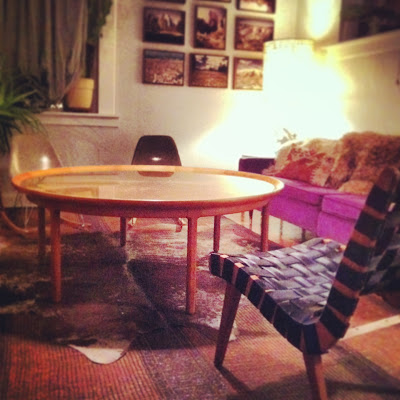