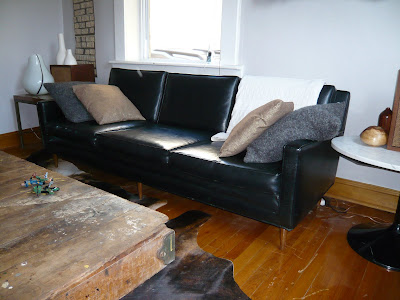 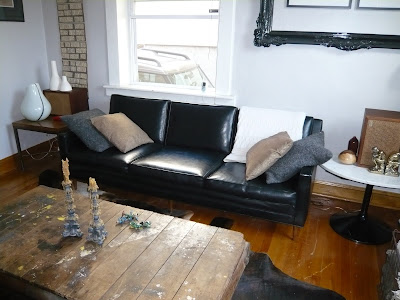 I have been spending my free time recently on a few projects. The first, is trying to get our family room back together.
We purchased a new couch, since the other one was way too light in color for our active family. I had been keeping an eye out for something smaller and easier to clean. Not much had surfaced, so I continued to clean our cream color couch, and talk about how my life would be much easier if he had a leather couch.
So, cut to the chase and I had a morning to myself and decided to make a quick stop at the local Salvation Army, and there it was just being wheeled off the truck. I said " I'll take it!". I was then told that there was no manager in for the day, and it couldn't be priced, therefore I couldn't purchase it. I asked when a manager would be in to price it, and was told the morning. I was just sick to my stomach. There was the couch of my dreams in perfect condition and I had to leave empty handed. The people working there were very sweet, despite me being crazy about some old couch, and they told me to return in the morning first thing and It would be mine.
I got home and told my husband and spent the rest of the day worrying about who else would see my couch and who was also going to show up in the morning for a chance at this great sofa.
I got to the Salvation Army at 8:30 am, the store opened at 9. Me and Baby J camped out with our Starbucks and portable DVD, and believe it or not we were the first ones in the door that morning. I put Baby J on the sofa as to mark our territory, and I went in search of the manager. I told her we would like to purchase the couch, and she told me we would have to wait till she got around to pricing it.
At this point I knew, and my husband also pointed out that my eagerness was going to get me gouged. We patiently waited until that little paper tag was placed on the arm of the couch, and I took a deep breath(I had already decided what my limit was) $29.99.

We took the couch and ran.
Posted by hannah at 5:25 PM