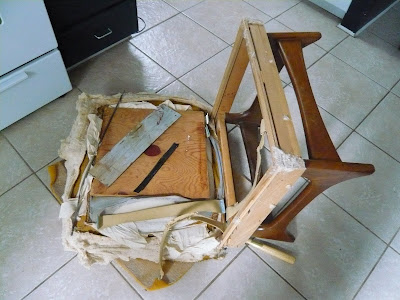 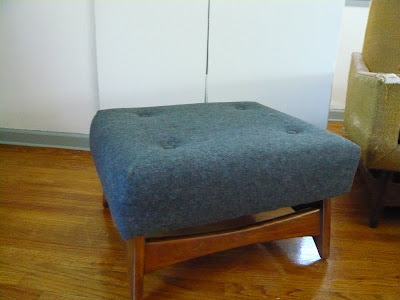 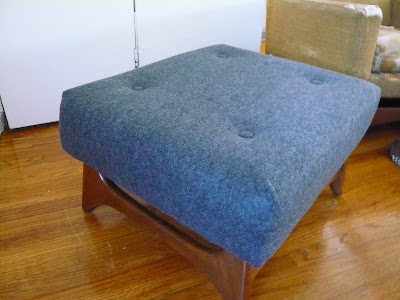 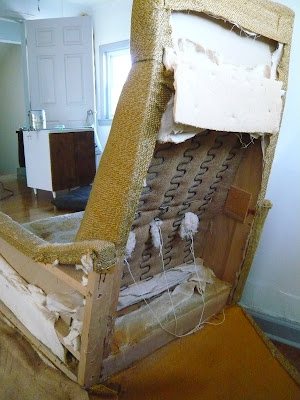 Two posts in one day! Crazy. The first photo is of the ottoman I reupholstered, of course I didn't think to take a picture until I had already unpeeled the layers. But, this poor ottoman had seen some things. At some point they straps/webbing had given out. The previous owners had wedged a metal rod underneath to support the piece of wood they were using to replace webbing. The original foam had dry-rotted, so to keep the ottoman in use they then placed a thin piece of foam on top and used another piece of fabric to cover and used a combination of nails and thumb tacks to secure.
I had already wiped the wood legs down with danish oil, and then after the layers were removed I used jute webbing in a basket weave pattern attached with a staple gun. I then used 3'' foam and a nice layer of batting to bring back the cush. For you that haven't had to buy new foam you may not know how expensive it really is. The foam I used from Joanne's fabric is 24'' wide and cost $49.99 a yard. My ottoman is 24'' by 21'', so this means that the one cut they give you at the fabric store was perfect for my project, I just bought exactly 21''. So, a little over half a yard and I had a 50% off coupon, I got my new foam for about $13. Good deal.
I then just put the felt on upside down pinned my corners, stitched with my sewing machine, stapled in place, used upholstery nails on the corners to insure no shifting. I covered 4 matching buttons, used a large upholstery needle to pull them through, tied them underneath with some scrap felt in the knot so they won't pull through. That's it, pretty easy project.
The last picture is of the matching chair that I started to take apart last night. There is one more chair that goes with this set, it has a lower back, and is considered the Mrs. chair. They all belong to the same set as the couch I just finished. I know it doesn't seem too imaginative to be using gray felt again, but I change and move my house around so much that I've found to stand the test of time, neutral is they way to go. Everything else can change around your major pieces without ever having to change your furniture.
Posted by hannah at 9:51 AM